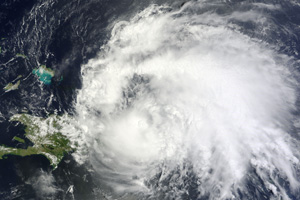 A tropical storm in the Caribbean has claimed one life in the Dominican Republic.

Authorities are evacuating thousands of people from communities considered at high risk of flooding.

Carnival Liberty was diverted away from St Thomas while Carnival Victory dropped a sea day to make a call into Nassau in the Bahamas.

The Miami-based US National Hurricane Center said Chantal, the third named storm of the 2013 Atlantic hurricane season, broke up east of Jamaica.

Chantal had “degenerated into a tropical wave” by last night but was producing heavy rain and gusty winds.

It was reported to be 230 miles east of the Jamaican capital of Kingston, moving westwards with winds of up to 45 mph.

The remnants of Chantal are expected to spread over Jamaica and eastern Cuba today (Thursday).

The National Hurricane Centre warned of the possibility of storm-force winds in Haiti and Cuba, and localised coastal flooding along the southern coast of Hispaniola.

Up to 6 inches of rain were expected over Haiti, the Dominican Republic, Jamaica, Cuba and the Bahamas, it added.