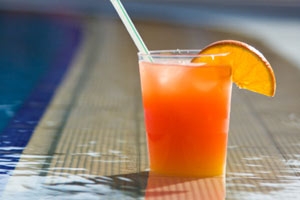 Taking an all inclusive option in Europe may not be the cheapest way to cut holiday costs, a study shows today.

Travellers could save more than £648 per couple by swapping an all inclusive break on the Algarve for bed and breakfast accommodation.

The third annual Post Office all inclusive holiday report reveals that holidaymakers could save money in some European destinations by booking a B&B holiday, eating in resort restaurants and buying drinks in local bars.

Taking a B&B in July in the Algarve and adding meals and drinks will cost two people £857 – £648 less than the cheapest all inclusive package costing £1,505.

A B&B package including meals and drinks was also cheaper than an all inclusive option in Cyprus by around £144 and in the Costa Blanca by more than £5.

Going all inclusive worked out slightly cheaper in the Costa del Sol by £6 and would put more than £54 in the pocket in Corfu and Majorca.

For those succumbing to all inclusive ‘buffet boredom,’ this would be more than enough to cover a couple of meals out in either resort, according to the report.

The findings come from a comparison of prices of all inclusive and B&B holiday packages in six European destinations over the summer. For the B&B trips, the price of drinks and meals for a week was added.

The study found that more than two-in-five adults have now been on an all inclusive foreign holiday and over 15.3 million paid for extras that were excluded from their package.

However, this year’s report found that holidaymakers now have a more realistic view of what will be included in their package.  Only 53%, nine per cent fewer than in 2012, expected to be offered restaurant choice – falling to half of those on a European holiday.

The exceptions to this were free access to the internet and alcoholic drinks.  In both cases more holidaymakers than last year expected these to be included. The study found that 58% thought free wi-fi would be available, compared with 43% a year ago, while 52% expected bottles of wine to be free of charge – up from 46% in 2012.

One in six (3.5 million) all inclusive holidaymakers admitted paying for a la carte meals to avoid the repetition of eating in the hotel buffet restaurant.

For this group of people the potential savings to be made by swapping to a B&B holiday could be even greater. At an average of over £30 per meal, the Post Office estimates that all inclusive holidaymakers who paid to eat a la carte collectively spent £104.5 million extra, 36% more than last year.

Given this trend, the report investigated attitudes to buffet meals, finding that fewer of those who took all inclusive trips in Europe were positive about the experience.

One-in-six said the buffet was ‘like eating a canteen meal’ – double the number of long haul holidaymakers who felt this.

One-in-ten said that the cheapness of their package failed to make up for poor quality food, while a quarter of holidaymakers paid for meals and drinks in local bars and restaurants because they got bored of the buffet.

Despite this, almost three-quarters of the holidaymakers surveyed rated buffet food quantity as good, while over three-in-five said that taste, quality and choice was also good.

Post Office research found that three quarters of 40 hotels surveyed excluded bottles of wine.  At an average cost per bottle of £13.39, the Post Office estimates that the 17% of the holidaymakers who paid extra for bottles of wine – 3.7 million people – spent £49.2 million extra between them to avoid glasses of house wine.

Similarly, 45% of the hotels surveyed excluded internet access, rising to 60 per cent in European ones.  As a result, 21% of holidaymakers (4.5 million) paid to use the internet.  Based on an average one hour charge of £4.62, Post Office Travel Money calculated that this would add £21 million to the holiday bill for this group of people.

Andrew Brown of Post Office Travel Money said:  “Our research has shown that European all inclusive resorts consistently offer less than their long haul counterparts so holidaymakers need to be aware of what is included in order to avoid getting caught out.

“We found that the all inclusive route is not always cheaper. In some destinations like the Algarve and Spanish Costas where restaurant prices have fallen dramatically this year, it may be cheaper to book a B&B package and eat out each day.

“It also depends on when you are travelling because prices vary quite significantly from month to month, depending on peak and off-peak seasons for each resort.  The only destination we researched where all inclusive was consistently cheaper was Majorca.”

He added: “As most people continue to pay for extras on their all inclusive holiday, it is important to carry enough foreign cash to cover meals, drinks and other charges that they are likely to incur.

“This year we again found that only half of the holidaymakers who paid for extras had taken foreign currency with them. Twenty five per cent paid by credit card and 18% by debit card, laying themselves open to additional bank transfer charges.

“Almost one-in-ten withdrew cash from an ATM abroad or changed pounds in their hotel where exchange rates are likely to be poor.”