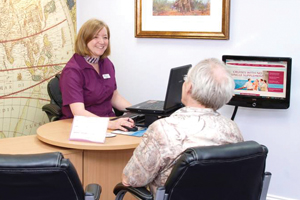 Six months ago Margaret Moulton would never have believed that she would soon be working for a different company in retail premises she used to work in more than 15 years ago.

But when she went into work at Cathedral City Travel on the high street in Wells on January 16, normal life as she knew it was turned upside down by the news that parent company Ambassador Travel had collapsed and all staff were being made redundant.

“We were told to shut the shop immediately. It was probably one of the worst days of my life,” says Margaret, who was one of the original founders of the agency in 2002 and sold it to Ambassador Travel in 2010 when the two other founder members retired.

“At the time the business was doing well and January was storming. We didn’t suspect anything so it was a devastating blow. We were more concerned for our clients,” she says. “For the first 48 hours I was thinking clients would blame me.”

A difficult two weeks followed as Margaret and her colleagues reassured customers their holidays were safe, personally delivered tickets and continued to work from home despite being made redundant.

Miles Morgan, owner of Miles Morgan Travel, was quick to contact the shop with an interest in taking over the assets once it had gone into liquidation.

“He acquired the assets by January 30 and we reopened in the original premises on February 1,” adds Margaret. “It’s been a complete whirlwind.”

Five months on, not only is the agency thriving but it has moved to a central location on the high street – in the same premises where Margaret once worked at Bakers Dolphin.

“It’s quite surreal to be back here in such a high-profile location. It’s almost like it’s fate,” admits Margaret. The new Miles Morgan Travel-branded agency is the first to boast a VIP lounge with a vintage wall map, one of the agency’s main talking points.

“People love maps and looking at where they want to go on it.” Other unusual artefacts include a didgeridoo, oil paintings by Rolf Harris, an Ali Baba jar and a steamer trunk with toys for children to play with.

An opening party was attended by the town crier, the mayor of Wells, councillor Theo Butt Philip, and about 150 customers.

“We are lucky we have a thriving high street with lots of individual shops,” she adds.