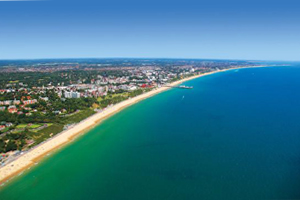 The cost of family holidays in Bournemouth is accelerating at a rate above many overseas resorts, according to a new study.

Prices have fallen by up to 19% in Bulgaria, Spain, Portugal and Greece, the Port Office family holiday report found.

But the biggest price rise was in Bournemouth, where the cost of a basket of typical items was 12% more expensive than last summer.

However, this was entirely as a result of the weaker pound because local prices were actually lower than in 2012 in all four resorts, the Post Office said.

The Croatian resort of Porec (£142) and Nice (£163) were among the most expensive destinations surveyed.

Family meals were the biggest single cost item in the Post Office barometer, which compared prices in 12 destinations including Bournemouth.

Majorca was lowest-priced at just over £30 for a three-course meal including drinks – adding up to around £212 on a one-week holiday.

Meals were also cheap in Sunny Beach, Bulgaria (around £38), helping to make this the cheapest resort for the third consecutive year.

At just over £76 for the basket of 12 family items, which included drinks, ice-cream, beach items and suncream as well as a family meal, Sunny Beach was £100 cheaper than Sorrento, the most expensive resort surveyed at over £176.

Andrew Brown, of Post Office Travel Money, said: “Our latest report makes it clear there are still wide variations across Europe in the cost of holiday items that tip the family budget into the red.

“With the continuing volatility of sterling, it will pay dividends to consider these when deciding how much spending money to take. “Families hoping to bag a last minute bargain should compare resort prices in our barometer before choosing their destination as these can have a big impact on the overall ‘package’ cost.

“The good news for families is that there is strong competition for business in many resorts – particularly between restaurants and bars – and this has resulted in lower prices in some holiday hotspots.”