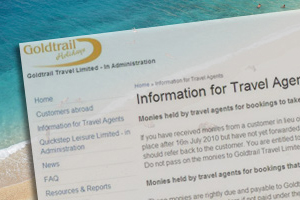 Yet there is a connection between the demise of the air broker that sold seats on Small Planet Airlines and a series of failures that cost the UK industry millions of pounds.

The Air Travel Trust alone paid out in excess of £70 million and the failures led directly to Atol reform.

What links the failures are the names Philip Wyatt, Halldor Sigurdarson, Magnus Stephensen and the company Black Pearl Investments, of which the three were directors.

More significantly, Wyatt was chief executive of XL Leisure when it folded with 85,000 clients abroad and 203,000 bookings.

Stephensen and Sigurdarson were executive directors. The failure, which Wyatt said left him “devastated”, cost £89 million.

Two years later, Wyatt, Sigurdarson and Stephensen were involved with Viking Airlines, in which Black Pearl Investments held a stake.

Now the three are subject to a High Court claim for £1.4 million filed by the liquidators of Goldtrail Travel.

The claim centres on allegations that Wyatt, Stephensen, Sigurdarson and Black Pearl Investments gave “dishonest assistance” to Goldtrail’s sole director, Abdulkadir Aydin, “in a breach of his fiduciary duty”.

Turkish airline Onur Air is subject to an associated claim for £3.64 million.

The claim documents suggest payments were made by Aydin to Viking and then funnelled back to him via an off-shore account in an arrangement proposed by Wyatt and his co-defendants.

They further suggest the arrangements were intended to deceive the CAA. The claim refers to an email Wyatt sent Aydin on April 14, 2010, headed “Mickey mouse.doc” which stated: “Viking contract for CAA purposes…do not forward this attachment to anyone.”

The court documents state that in 2010, “£1.4 million was transferred from Viking to the Cyprus account . . . a large majority of these monies can be shown to have originated from the claimant [Goldtrail liquidators]”.

The documents claim: “The First Defendant [Aydin] misapplied the Claimant’s monies . . . and the second [Black Pearl Investments], Fourth [Stephensen], Fifth [Sigurdarson] and Sixth [Wyatt] dishonestly assisted this breach”. . . in that they “advised on the structure of the transaction and provided some assistance”.

Aydin is held liable for more than £4 million but is not in the UK and is not expected to return.

He was found guilty of “gross mismanagement” in the High Court in May following a case brought by the Insolvency Service.

The court heard Aydin transferred more than £10 million to himself and family members ahead of Goldtrail’s collapse, and that he paid £3.9 million to two airlines as part of “secret share sale agreements” which saw him receive over £4 million in return.

Lawyers for Wyatt, Stephensen, Sigurdarson and Black Pearl contest the claims and deny “evidence of dishonesty for the purposes of dishonest assistance”.

They deny the trio controlled Viking in its dealings with Goldtrail. They concede there were negotiations with Aydin on the purchase of “a substantial part” of Goldtrail, but claim Aydin proposed the form of payment.

The case is not expected to be heard until next year.