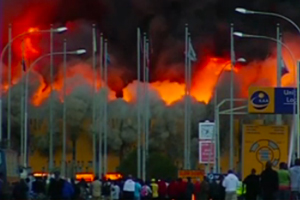 The main international airport in the Kenyan capital of Nairobi was shut this morning after a massive fire broke out.

Passengers were evacuated from Jomo Kenyatta international airport as the blaze took hold.

There have been no reports of any casualties and the cause of the fire is not clear, the BBC reported.

Interior and co-ordination of national government principal Secretary Mutea Iringo said: “There is a serious fire at JKIA, but we are doing everything possible to avert a crisis.”

The Kenya Airports Authority said images posted on Twitter showed smoke and flames billowing from one of the main buildings.

The airport authority said: “We confirm reports of a fire at JKIA affecting part of [the] international arrivals building and Unit 1 departures.

“KAA Fire and Rescue Team is on [the] ground being assisted by G4S and Nairobi Fire Brigade. Passengers have been evacuated to safety.”

The KAA later tweeted that the airport had been closed until further notice and only emergency vehicles were allowed in the area.

Kenya Airways said all its flights have been cancelled and those due to land in Nairobi were being diverted to Mombasa and alternative airports.