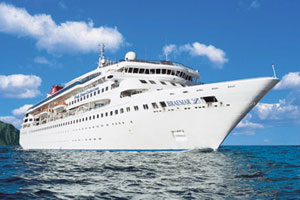 Fred Olsen Cruise Lines is to relaunch its Caribbean fly-cruising programme in January 2015 having previously scrapped the sailings due to high air costs and APD.

The line has announced it is to offer one 14-night cruise onboard Braemar for 2015.

In 2011, Travel Weekly reported that the high cost of APD had been partly blamed by the lines withdrawal of the Caribbean fly-cruises from 2012/2013 season.

He said the cruise line had been “inundated with requests to return to the Caribbean”.

Philpot added: “We have returned to Caribbean fly-cruising in January 2015 because we have listened and responded to our customers.

“We have received overwhelming feedback from previous guests during the last 18 months that they wanted us to return to the Caribbean.

“That, together with our incredibly strong repeat rate, nearing 50%, gave us the confidence to reintroduce one Caribbean fly-cruise, with an itinerary that has been specifically created and is based upon the ratings and feedback for Caribbean islands from our previous guests – it really is the pick of the best from experienced Caribbean cruisers.

“Air costs and APD continue to be a barrier to successful Caribbean fly-cruising. However, in 2011/2012, we were offering nine fly-cruises of 15 nights, so a total of 135 nights.

“Here, we are launching just one cruise of 14 nights. We are therefore confident of achieving far better yields than on the previous fly-cruise season and we are optimistic that the cruise will sell out quickly. If this first one performs well, it will be fantastic to add more.”

The relaunched sailing will leave Barbados on January 12, 2015, flying from Gatwick or Manchester. The cruise will call in Grenada, Aruba, Cuba, Turks and Caicos, the British Virgin Islands, St Kitts, Antigua and Barbados.

Braemar last embarked on a Caribbean fly-cruise in March 2012, on a 16-night From the Caribbean to the Azores cruise.