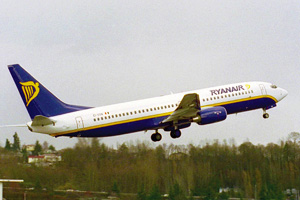 Ryanair has sacked pilot John Goss after he appeared in Channel 4’s Dispatches show about safety, according to reports today.

According to the Guardian the airline sacked the long-standing pilot with immediate effect and started legal proceedings against him after he appeared on the Ryanair: Secrets from the Cockpit documentary which raised questions over the airline’s safety policy.

A memo has also been circulated to all Ryanair pilots by its director of flight and ground operations, David O’Brien, according to a report in the Irish Independent.

“I write to advise you that Capt. John Goss was today dismissed with immediate effect from Ryanair,” the memo said. It added that safety remains Ryanair’s “No 1 priority”.

The memo also said management wrote to Mr Goss three weeks ago. Ryanair said it was “shocked and astonished” that he then contributed to the Channel 4 documentary.

The Guardian reports that Ryanair has instructed lawyers to take legal action against Channel 4’s Dispatches. It isn’t known whether Goss, who has been a captain for 25 years and was expected to retire in October, has taken legal advice.

Goss is a member of the interim council of the Ryanair Pilot Group (RPG) which the budget airline has described as a front for pilots’ unions seeking to force the carrier to recognise union membership.

Ryanair said: “We will not allow a Ryanair employee to defame our safety on national television just three weeks after he confirmed in writing to Ryanair that he had no concerns with safety and no reason to make any confidential safety report to either the IAA (Irish Aviation Authority) or Ryanair.

“Ryanair rejected the false and defamatory claims made by the Channel 4 Dispatches programme which wrongly impugn and smear Ryanair’s outstanding 29-year safety record based on nothing more than anonymous hearsay claims made by individuals whose identity was concealed, and/or by representatives of pilot unions of Ryanair’s competitor airlines masquerading as a non-Ryanair Pilot Group.”