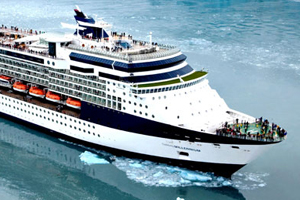 Celebrity Cruises has been forced to cancel a 7-night Alaska cruise on Celebrity Millennium because of propulsion problems with the ship.

The 2,138-passenger Celebrity Millennium has been stuck in Ketchikan, Alaska since Sunday due to a problem with one of its two propulsion units, and a solution has yet to be found, reported USA Today.

Passengers will be offered a full refund and credit for a future cruise. The line is arranging charter aircraft to fly passengers home from Ketchikan today and has sent 30 members of its guest services team to the ship to assist with the process.

The line said in a statement: “Our engineers, along with expert consultants from the motor’s manufacturer, and our marine operations team in Miami, have continued working around the clock to resolve the mechanical issue on board Celebrity Millennium.

“Regrettably, as of this time, they have been unable to find a satisfactory solution that would enable the ship to continue with its sailing.”

This is the third voyage of the Celebrity Millennium that has been affected by a mechanical problem. The ship ran several hours behind schedule on August 9 after experiencing an electrical issue with one of its two propulsion motors.

It underwent three days of emergency repairs, resulting in the cancellation of every port call on the ship’s subsequent sailing.