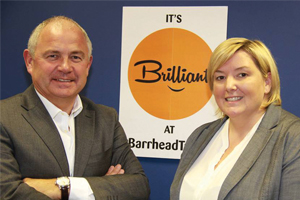 Barrhead Travel has pledged to learn from the mistakes of its competitors as it expands its homeworking and managed service divisions under a new brand.

Barrhead said there was also “a very real possibility” the Brilliant brand would be used for shops it plans to open in England, Wales and potentially Europe.

The Brilliant concept was devised by Trevor Davis, who joined Barrhead as new business development director in June from Thomas Cook Group.

Barrhead’s current 15 managed service branches, which are independent agencies that use Barrhead’s Atol and Abta number, will be rebranded as Brilliant Travel Partners, while its 16 homeworkers will become part of a Brilliant Travel Creators division.

Davis, a former retail director of The Co-operative Travel, said he had received many calls from homeworkers and agents of other consortia since joining Barrhead.

“There are a lot of experienced travel people being made redundant and looking for a new direction,” he said.

“Some want to go into homeworking, but I have been surprised at the number who want to start on the high street.

“This brand gives us the flexibility to expand however and wherever we want.”

Davis told Travel Weekly that whereas other consortia tended to overcomplicate the terms of their membership, Brilliant would offer a fixed all-inclusive management fee.

He said: “A lot of people don’t like the razzamatazz. They are experienced professionals who want access to product and technology that’s reliable.

“There can be a tendency to overcomplicate things, bombard people with too much information and fail to remember that it’s their business and you have to respect that.”

Davis said Barrhead would assure its managed service agencies that it would not open one of its own shops nearby.

He said new members would be attracted to Brilliant Travel by exclusive product, technology and the company’s independence.