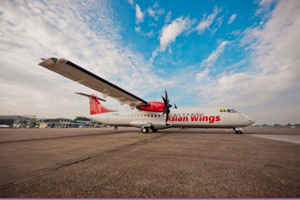 All Nippon Airways is establishing a foothold in Burma by taking a 49% stake in local airline Asian Wings Airways.

The move by the Japanese carrier comes as Asian Wings looks to expand from operating only domestic flights into international services.

Asian Wings plans to start international flights from October and expand its fleet to ten Airbus A320s by 2018.

ANA said: “The acquisition of the stake in AWA represents the first investment in a Burma-based commercial carrier by a foreign airline.

“ANA intends to capture an increasing share of the fast-growing Asian airline market and this investment in AWA will support that strategic goal.”

ANA is raising frequency between Tokyo-Narita and Yangon from three to seven flights a week from September 30 and will introduce larger aircraft on the route.

It will also improve connectivity with onward flights operated by Asian Wings to key cities in Burma.

AWA reported revenue of $17.8 million in the financial year ending in March.