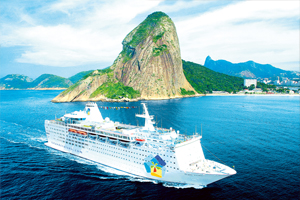 A group of 50 passengers are taking legal action after an outbreak of illness on the ship Island Escape.

Law firm Irwin Mitchell has been instructed to investigate the concerns of 50 passengers who travelled on the Tui UK & Ireland ship between March and June this year.

The solicitors said many were confined to their cabins after suffering diarrhoea and sickness and there were also complaints about food, damp rooms and overflowing toilets, the Yorkshire Evening Post reports.

Leeds pensioners Ralph and Patricia Hewitt said they were left traumatised when the ship listed violently to one side after leaving the port of Civitavecchia, near Rome.

The ship lurched suddenly to one side, throwing passengers – many of whom were in bars and restaurants – to the floor and causing injuries, they said.

The grandparents joined the Island Escape in May for a week’s Mediterranean cruise and then a week in a hotel in Majorca.

A spokeswoman for Island Cruises said: “We are sorry to hear of this experience on board the Island Escape. As this case is now subject to legal proceedings it would be inappropriate for us to comment further.

“The ultimate priority for Island Cruises is the health, safety and comfort of all our customers. We operate stringent health and hygiene procedures in line with industry standards.”