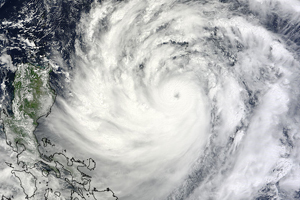 Alerts have been issued in the Philippines and Taiwan ahead of the arrival of Typhoon Usagi.

Meteorologists say the developing storm could become the most powerful typhoon of 2013 in the region.

The typhoon was 350 miles east-southeast of Taiwan and 225 miles from the northern Philippines on Friday morning, weather officials said.

The tropical hurricane is expected to hit China over the weekend.

Typhoon Usagi had wind speeds of up to 110 mph and gained strength early today, according to the Philippine government’s weather agency.

Storm warnings for flash flooding and landslides have been issued.