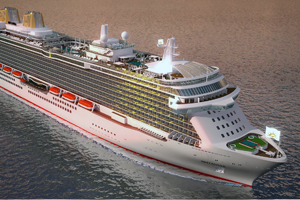 P&O Cruises is to name its new ship Britannia.

Speaking at an event this morning in front of Carnival Corporation chairman Micky Arison and chief executive Arnold Donald, P&O Cruises and Carnival UK chief executive David Dingle said the naming of the ship reflected a “rediscovered pride in our country”.

He said: “Britannia is a most fitting name for the newest addition to P&O Cruises which, with its long and famous heritage, remains Britain’s favourite cruise line. Britannia will capture both the contemporary spirit of P&O Cruises and the spirit of Britain today.

“Today’s Britain is a place of increasing style and sophistication, optimism and excitement. Britannia will reflect that feeling and will mark a new era of growth and success for the cruise industry.”

He added: “Britannia will underpin P&O Cruises’ unique commitment to building ships specifically designed to anticipate the tastes of today’s Britain. It will be a modern classic, a ship for this and future generations offering authentic travel by sea in an enduringly contemporary setting.”

The ship will be the third connected with P&O Cruises to be named Britannia. The first entered service in 1835 for the General Steam Navigation Company; the second entered service in 1887 and was one of four ordered to mark the Golden Jubilee of both Queen Victoria and P&O itself.

The new Britannia is being designed by London-based Richmond International, and in response to feedback will feature more single cabins than any other ship.

P&O also claims it will be its greenest yet, and will be designed to deliver much greater levels of operational and environmental efficiency. A new hull form will reduce fuel consumption by up to 20%.