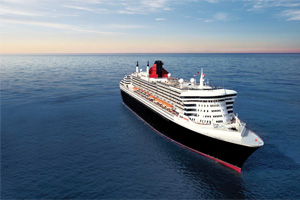 Cunard flagship Queen Mary 2 stopped in mid-Atlantic yesterday to provide assistance to a lone woman rowing across the ocean.

The ship, sailing from New York to Southampton, received a request to assist after Canadian solo rower Mylène Paquette lost her anchor and a satellite phone in a storm.

She received four watertight canisters containing the requested items including a new satellite phone after 83 days at sea and two months to go.

QM2 slowly circled the boat at 10 knots to calm the water before the provisions, including food, bottled water, tea and coffee, were dropped into the sea and collected by Paquette.

The ship also supplied a scraper to remove the barnacles underneath the rowing boat, duct tape, soap, shampoo and body lotion.

Captain Kevin Oprey, master of QM2, said: “We are happy to have given assistance to Mylène and help her recover from the damage inflicted by the storm. We wish her the very best of luck with her solo Atlantic rowing adventure.”

Paquette said: “This is a dream come true! For me to see the Queen Mary 2 in the middle of the Atlantic is something I would have never hoped for. I want to thank all of the members of the crew for making this encounter happen.”

She is aiming to become the first North American woman to row solo across the Atlantic, a total of 2,700 nautical miles, having set out from Halifax, Canada on July 6 for Lorient in France.