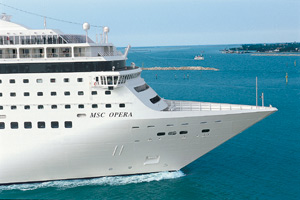 A body recovered from the English Channel is thought to be a missing MSC Cruises’ crew member.

The Isle of Wight County Press reports that the body was found 15 miles off the Isle of Wight’s St Catherine’s Point by the Bembridge RNLI offshore lifeboat.

The paper says the discovery follows cruise ship barman Elroy Fernandes jumping overboard from MSC Opera as it made its way to Southampton.

The body has been taken to Portsmouth for identification.

MSC said: “MSC Cruises confirms that at 5:30 on the morning of Tuesday, 24 September 2013, staff on board MSC Opera were alerted by a crew member that Elroy Fernandes, a 33-year-old crew member of Indian nationality, was missing.

“A thorough search of the vessel was immediately carried out and recent footage from the ship’s various security cameras was checked. At around 6:30, video footage of Mr Fernandes jumping over board was discovered.

“Coastal search and rescue stations were immediately notified and a search at sea was initiated.

“At the time, MSC Opera was already entering into the port of Southampton and the UK Coastguard instructed the ship to continue into the port, relieving MSC Opera of the search and rescue operation. MSC Cruises is currently collaborating with the appropriate UK authorities.

“Mr Fernandes was working as a bartender on board MSC Opera and had been working with MSC Cruises on several ships in the fleet since 2007. The company’s thoughts and sympathy are with his family, friends, and colleagues.”