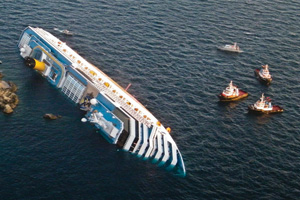 A detailed version of events on the bridge of Costa Concordia in the minutes leading up to the ship crashing into rocks has been relayed to a court in Italy.

Captain Francesco Schettino ordered his navigator to change route from its designated course so that the ship passed within just a few hundred yards of Giglio, the court heard yesterday.

Schettino is on trial over the disaster in which 32 people died.

“Let’s get really close to Giglio, I love doing these salutes. Let’s go and do this Giglio s***,” the captain told his crew, as the ship prepared to set out from Civitavecchia, the port of Rome, on the night of January 13, 2012, at the start of a week-long cruise of the Mediterranean, the Daily Telegraph reported.

Audio recordings from the bridge, which were played in court, showed that Schettino made the remarks at 6.27pm that evening.

Schettino spoke in Neapolitan dialect, rather than standard Italian, when he told the ship’s navigator Simone Canessa to change the route.

The officer told the court in Grosseto, Tuscany, where Schettino is on trial for manslaughter and abandoning ship, that he was not explicitly told the reason for the change of course, according to the report from the trial.

“I wasn’t directly given any information but I heard that it was to perform a salute, for the benefit of members of the crew who came from Giglio,” he said.

Schettino reportedly performed the sail-past to impress Antonello Tievoli, the ship’s maitre’d, who was from Giglio, and Mario Palombo, a sea captain and friend who was on the island that night and with whom he was in contact by telephone.

The court also heard an audio recording of the moments after the ship crashed into the rocks and the captain realised the enormity of what had happened.

As water flooded into the engine rooms and a power black-out sparked fear among the passengers, Schettino called Roberto Ferrarini, the head of the crisis unit of Costa Cruises.

“Roberto, I took the ship past Giglio. Palombo was telling me ‘sail close, sail close’. I hit the rocks. I’m destroyed, I’m dead, don’t say anything to me.”

Another witness, first mate Giovanni Iaccarino, said that the captain put his head in his hands and told the officers on the bridge: “I messed up”.

Canessa also claimed Schettino showed chronic indecision as he contemplated the loss of his ship.

“I was saying to him very insistently that he needed to do something, to give the general emergency signal, but he was telling us to wait,” he told the court.

“At first he gave the impression of having everything under control and initially us officers were less insistent, but then we started shouting and screaming at him to give the emergency signal.”

It was only much later that the captain gave the order to abandon ship.

He also made a point of going below to change out of his captain’s uniform and into civilian clothes, allegedly in an effort to blend in with passengers when he abandoned ship before the evacuation was completed.

“I saw him later and he was wearing a blue jacket,” said Canessa. “He had changed out of his uniform.”

As panic broke out on the bridge after the collision, Schettino turned to Domnica Cemortan, a Moldovan ship’s dancer whom he had had dinner with that night, and told her “You will be saved”, according to Canessa.

Cemortan was not the only non-officer on the bridge. “There were other girls, hostesses,” Canessa said.