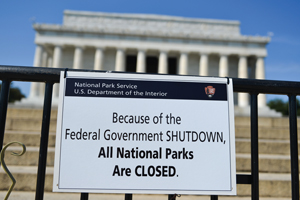 The managing director of escorted tour operator Trafalgar has slammed the US government as its shutdown forced the closure of hundreds of tourist attractions for a third week.

Gavin Tollman said he was frustrated by the shutdown, which he described as an “unbelievable and avoidable string of events”.

National parks and tourist attractions closed on October 1, but are due to open today (Thursday) following the passing of a bill to reopen the government and raise the federal debt limit.

Tollman said his call centres had been inundated with calls from customers.

“I am very frustrated about the shutdown,” he said. “The guests who are on the road now or are now flying out have been the most outraged.

“We have really done everything we can to find alternatives, but it is difficult when part of a tour is to stay in the Grand Canyon National Park only for that not to be possible.”

And while he maintained the shutdown was unlikely to have a long-term impact, Tollman said Trafalgar had seen a slight decline on future bookings on tours that involved visiting national parks.

He said many customers had waited to see whether the debt limit was increased.

Funway managing director Stephen Rhodes agreed the closures would not have a long-term impact and said his US bookings for 2014 were up by 30%.

Some attractions such as the Statue of Liberty and the Grand Canyon had already reopened after state officials reached deals with the federal government.