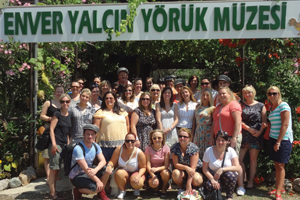 Russell Thompson wants to make a difference. His infectious passion for helping local communities at home and in holiday resorts, for the environment and for encouraging responsible ways of working and living has already seen him appointed one of Thomson’s 28 sustainable development champions across the company’s retail business.

Russell, who joined Tui Travel as a Lunn Poly modern apprentice 16 years ago, is tasked with raising the profile of sustainable developments in his region as well as supporting chosen regional charities.

He is already well known for setting up a ‘sponsored Zumbathon’ day with a local health club and pub. This involved shop managers taking part in Zumba dance classes, followed by a lunch and team-building sessions. The event raised £2,500.

The role also means ensuring staff are knowledgeable about sustainable tourism, and telling clients how they can help by, for example, donating £1 to the World Care Fund towards Travel Foundation projects and schemes to reduce carbon emmissions.

“We want customers to support and embrace this,” says Russell, who encourages stores to promote hotels with the Travel Foundation’s Travelife badge of approval.

Hotels are awarded Travelife status for projects such as recycling and cutting waste.

Tui Travel has set itself a target to deliver 10 million ‘greener and fairer’ holidays  by 2015.

Russell is convinced the tide is already turning, with clients now starting to ask about the issue in stores. “I honestly think it’s starting to change; some customers will now proactively ask about Travelife hotels or sustainability,” he says.

Russell’s passion for the role – which takes up at least one afternoon a month – was fuelled by a trip to Turkey with the 27 other company champions.

The trip involved a beach clean‑up and visits to farms in the Travel Foundation’s Taste of Fethiye project. “The concept is to get farms in the area servicing the hotels which use their produce rather than using wholesalers in Istanbul,” says Russell.

“The trip was a fantastic chance to share ideas and brainstorm.”

Sharing experiences could be the tip of the iceberg, says Russell, adding: “If we can get the whole industry inspired, we’ll be able to make a massive difference.”