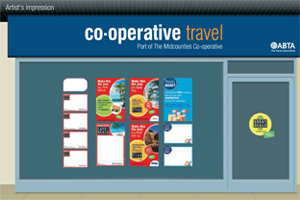 Midcounties Co-op Travel is to rebrand its entire shop network with a new look that highlights its independence and distinguishes it from other Co-operative Travel agencies on the high-street.

The change will see the distinctive orange colour dropped from shop fronts and replaced by a blue background, although some orange will be retained within the wording. Agents’ uniforms will similarly switch to the new blue branding.

The Co-operative Travel name will be replaced by just Co-operative Travel. The brand will make clear shops are part of Midcounties and also feature the Abta logo to show the group’s commitment to the organisation, said group general manager, Alistair Rowland.

He added that the rebrand would also remove any confusion of shop ownership between its branches and those of the joint venture, particularly in locations where Midcounties’ shops are near to The Co-operative Travel branches in the Thomas Cook group.

“It means we are in a position where we can distance ourselves from the joint venture once and for all,” said Rowland. “We are not tied to anyone else. There is nothing about our travel business that is linked to another other organisation. This will give us a point of differentiation.”

He added: “We are underpinning the Co-operative name by saying we are part of Midcounties to show our independence and we are highlighting the benefits of the Abta brand and sharing that badge loud and proud.”

The first shop to be rebranded Co-operative Travel will be the newly relocated Wolverhampton branch on October 24. The rest of the network will be completed by the end of the year.

Last year the group branded several shops with its website name, cooptravel.co.uk, as part of a trial. This will now be replaced by the new branding.

Rowland said: “We just think the ‘Co-operative Travel’ brand is much more appropriate and shows our absolute commitment to it and the positive history and heritage it commands.

“The new logo has been chosen by all of our colleagues based on what we want to be, the best independent travel provider with Co-operative values”