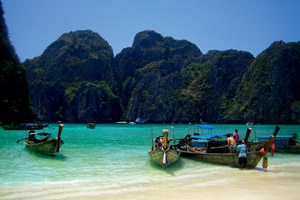 The Thai government’s proposals for an international tourist tax have been described as cavalier and a “double whammy” for tour operators.

The Thai government announced this week it was considering a tax on international visitors from as early as January 2014 to pay for tourists’ unpaid medical bills and to attract more “quality” holidaymakers.

The tax would be around 500 baht, around £10, per person when arriving by air and staying longer than three days or 30 baht (60p) if travelling overland from a neighbouring country or staying less than three days.

AITO chairman Derek Moore said the proposal was yet another case of a government seeing tourists as “an easy target”.

He said: “If introduced as early as January, this would not only penalise would-be tourists but it would be hard  for tour operators which spend money promoting Thailand only to find that they have to absorb the £10 rather than pass it on because of the short lead-in time.

“This would be a double whammy for operators, and imposing such a tax is cavalier and shows a lack of understanding in tourism. It almost reminds me of the behaviour of the British government over Air Passenger Duty, which sees a tax on travel as fair game.”

Tour operators said the impact of such a tax could only be negative and send out the wrong message for the destination.

Premier Holidays has already raised its objections with the Tourism Authority of Thailand (TAT). Thailand is one of the operator’s key destinations. Its sales to the destination are 16% up this year and 18% up for bookings for next year.

Head of sales and marketing Debbie Goffin said: “We are working with the Thai tourist board to make sure it doesn’t come in. We are having discussions to put our views forward on this, and the tourist board does tend to listen to operators.”

If it were to be introduced as early as January, the operator would have to absorb the cost, she said, before considering whether to absorb or pass the cost on to holidaymakers on future bookings.

Hayes and Jarvis regional destination manager, Far East, Glenn McCool added: “There is no doubt the introduction of any such tourist tax does not come without criticism and would only be a negative message for the destination.”

Western & Oriental sales manager Nigel Ham said a tax would be badly-timed with the UK just coming out of recession, adding: “It could also have a knock on affect on the amount of people who go.”

TAT has been quick to point out that the proposal is “one of several ideas” under consideration by the Ministry of Health and Ministry of Tourism & Sport to boost investment.

A TAT spokeswoman stressed the bill had yet to be approved and passed by government.

Unpaid medical bills, left by visitors staying in Thailand without the correct travel insurance, are costing the Thai government around 200 million Thai baht a year and putting a strain on the country’s hospitals, according to TAT.

It has been reported that around 100,000 foreigners are currently staying on in the country on expired visas. In 2012, more than 22 million international tourists visited Thailand, with growth forecast to continue in 2013-14.