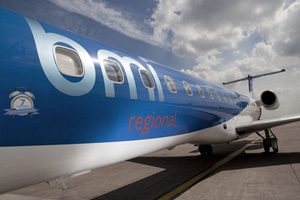 BMI Regional is withdrawing from three UK bases and closing five routes in a restructuring of operations.

Bases in Edinburgh, Birmingham and Manchester will close and routes from Manchester to Edinburgh and Antwerp; Birmingham-Billund and Edinburgh to Copenhagen and Brussels are being axed.

The airline, which employs about 400 people, expects no net job losses as a result of the move, the BBC reported.

A airline spokesman said: “We have started consultations with affected employees, including the opportunity to move to one of our other crew bases.”

The retrenchment will leave Aberdeen and Bristol as BMI Regional’s main hubs.

An Aberdeen-Manchester route will continue but will be crewed from the Scottish city.

The spokesman said: “Following a comprehensive review of our network, BMI Regional has announced the closure of five routes.

“BMI Regional is to focus on routes elsewhere in Scotland and in other parts of the UK and Europe.

“As a result, our crew bases in Birmingham, Edinburgh and Manchester will close.

“We would like to reassure all customers booked to fly with us on the affected routes that services will operate up to the termination date – 29 November for Manchester, 31 December for Billund and 5 January for Edinburgh to Copenhagen and Brussels.

“We will be in contact with passengers booked beyond these dates to offer alternative arrangements or refund.”

The carrier, which runs 18 Embraer jets on scheduled services as well as leasing and charter contracts in the UK and Europe, was bought for £8 million by Sector Aviation Holdings last year after former parent company BMI was taken over by British Airways parent International Airlines Group.

The airline last week announced a new route from Newcastle to Brussels from March and launched an Aberdeen-Oslo service on Monday.