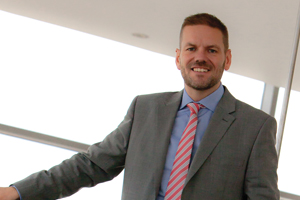 The new UK and Ireland boss of Royal Caribbean International has never worked in the cruise industry before – or even been on a cruise. But he already has some clear ideas about what he wants to achieve in his new role, as Lucy Huxley found out

I caught up with Stuart Leven just four hours into his new role as UK and Ireland managing director of Royal Caribbean International.

I was thinking of going easy on him since he’d barely had a chance to get his feet under his desk, but here he was, hitting the ground running by attending the Travel Convention in Dubrovnik, Croatia, listening intently to the business sessions for advice and meeting key retail partners in every break.

It was his first Abta convention since 1989 in Acapulco and Leven said a lot had changed since then.

“The landscape is so different. There are fewer agents. I looked at the [Travel Convention] attendee list and recognised many names from independents but very few from the big guys and the conglomerates. There were some notable absentees,” he said.

“The one immediate observation was that it appears far more professional. The fittest have definitely survived and it appears that the relationships weighted towards a consultative approach are now prevailing.”

In touch with trade

Leven knows he’s going to need great relationships with the trade in his new role.

“The lion’s share of cruises are still booked through the trade. So the customers’ first touchpoint is not us, but the travel agent. So it can’t be about commoditisation and has to be about selling the value of a cruise,” he said. “We have to understand our customers and we have to segment our data.

“Instead of one big pie to carve up, there are actually lots of different ones to target, but they each have to be approached differently.”

Leven may be planning to target lots of the smaller markets but he certainly wants Royal Caribbean to grow its total share.

“We need to increase the size of the pie and, at the same time, take a bigger slice of it ourselves. There is still a massive piece of work to do in terms of marketing cruising per se in the UK, alongside marketing our particular product.

“I met up with Royal Caribbean president Adam Goldstein recently and was blown away by his passion for converting people to cruise. It’s a challenge for the whole cruise industry. [Cruise trade body] Clia will of course play a massive role, and I will be actively involved in that,” pledged Leven.

In at the deep end

It is just one example of how he is throwing himself into the new role. In our interview, he referred repeatedly to all the research he had done and to his plans to look around Independence of the Seas in Southampton this month, visit the UK’s new call centre in Guatemala and then sail on either Allure or Oasis of the Seas in the Caribbean, all before Christmas.

It will be his first experience of cruising. Leven admitted that initial observations would suggest that his perceptions of modern day cruising were probably wide of the mark.

He has just returned from travelling around Europe and Morocco with his wife and children in a VW Campervan for six months, and said: “We were in Dubrovnik at the end of June. We were advised not to go into the old town on a Saturday or Sunday when all the cruise ships were in. We went anyway and it was very different to what I was expecting.

Leven said it was Royal Caribbean Cruise Lines’ decision to restructure the UK business, and invest in dedicated teams for Royal Caribbean, Celebrity Cruises and Azamara Club Cruises, that had attracted him to the role.

“I had a few other options on the table but one of the reasons for joining Royal Caribbean was that it was in great shape with its trade partners, had great relationships with its customer base and a clear direction.

“The decision to have three dedicated teams for the brands, which has not been done outside the UK, tells a great story, and is an indication that Miami really believes in the UK and Ireland market – and so do I.”