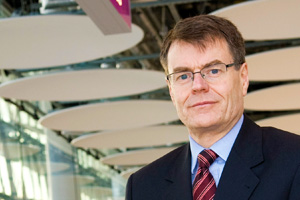 Heathrow boss Colin Matthews made a fierce defence of the airport as London’s hub at World Travel Market (WTM) yesterday.

“Only six airports around the world serve 50-plus long-haul destinations and Heathrow is one. It has 90. We tend to take it for granted, but it is worth hanging on to.”

Matthews argued: “There are significant economic consequences [to losing a hub]. . . Business happens in London because we have connections.

“Why else do 80% of long-haul flights from the UK operate from Heathrow? It’s because of the transfer traffic.”

Matthews said: “In the US, the number of hubs has declined. Cities that kept a hub have grown, others have suffered.”

Matthews suggested that if a route was not flown from London, it would be flown from Paris or another rival hub. “Some say that does not matter, but it does matter because if it is flown from London more tourists can choose to come to here.

“We want the Davies Commission [on hub capacity] to nail that question of why a hub matters.”

Matthews said: “If we had the capacity we would probably serve 20-30 more routes. At the moment we turn airlines away.

“There are huge economic incentives for airlines to go to other airports, but they don’t go. Gatwick has lost airlines because it can’t feed transfer traffic [on to flights].”

Asked about Norwegian Air Shuttle, which recently announced the start of long-haul flights to the US from Gatwick, Matthews said: “It’s not the first flight launched from Gatwick to a long-haul destination. There have been others and they stopped. Let’s see what happens.”

He insisted: “Airlines don’t come to the UK if they can’t come to Heathrow – they go to Paris, Frankfurt or Schiphol.

“If London was a weaker hub, less business would be done in London.”
When it was suggested London might be better served by two hub airports, Matthews said: “Others have tried it.

“Tokyo tried it 30 years ago when it was the number-one airport in Asia. Now it’s number seven and trying to reverse its decline. We should not take a 30-year diversion.

“The choice is between one hub and none, not two or a split hub. A split hub won’t work because people won’t choose to leave one airport to go to another. They will choose Amsterdam or Paris instead.”

He added: “Boris Johnson is right – if we had a new airport in East London we would have to shut Heathrow.”