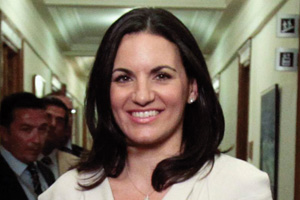 The Greek National Tourism Organisation (GNTO) expects 2013 to end with record UK visitor numbers, 5% up on 2012.

That is no mean achievement given the extent of the crisis in the country. Eighteen months ago the situation appeared dire, even for tourism.

When Olga Kefalogianni took over as tourism minister following the election triumph of her New Democracy party in June 2012, visitor numbers were falling.

“The situation last July was challenging,” she said.

“We were affected by all the negative publicity. We saw a big decrease in pre-booking.”

In the circumstances, it is remarkable the country ended the year with international visitors down only 5% on 2011. “Tourism to Greece and the brand of Greece showed its resilience, especially the UK market,” said Kefalogianni.

From revival to record

“It was a comeback year. Now 2013 will be a record year for arrivals and revenue from the UK.”Total international visitors were up 11% on 2012 in the first eight months of this year.

The ‘Greece: all time classic’ campaign launched by the GNTO a year ago proved “an effective investment”, says the minister.

At the same time, she acknowledged: “Greece was very good value for money. After several years of people being reluctant to visit, they came back.”

She does not have funds for marketing this year any more than last – quite the contrary.

Her department faced a budget reduction of 40% this year.

Kefalogianni said: “We have budget constraints. The economic situation is still challenging.

“We are under very tough scrutiny. All ministries face cuts. It makes the job more difficult but forces us to be creative.

“It is important we work with our traditional partners and we work more on the web, communicating direct with customers.”

The UK remains the number-two overseas market to Greece behind Germany. But Kefalogianni said:

“The UK is possibly the most important source market because we believe there is still a lot of potential. We have not reached the maximum [number of visitors] from the UK.

“Up to now we only had more traditional clients. But a study suggests we could increase the UK total from 17.5 million visitors a year to 25 million.”

The tourism ministry believes a new marketing message, that “Greece is not only for the summer”, can attract more UK visitors and make the country a year-round destination.

The GNTO recently launched a new phase of its campaign entitled ‘Secret Greece’, the focus of its presence at this week’s World Travel Market in London.

The latest marketing focuses on Greek history, culture and food, alongside “places people have probably never heard of”.

Kefalogianni said: “Greece is not just a traditional destination. We have everything. We don’t have the budget for traditional media. Our campaign will be mainly online.”

But there will be one exception, the US, “which was affected a lot by negative publicity last year”.

A US campaign next year will declare “Greece is in vogue” after it “was packed with celebrities” this summer.

The government may not have money but it has taken two recent measures to boost tourism. In August, Greece cut the price of restaurant and hotel food and drink by reducing VAT from 23% to 13%. It also cut planning regulations and announced incentives for resort developments combining hotels, vacation homes and tourism infrastructure such as golf courses. There are already plans for 20 projects.

Kefalogianni said: “These will be high-standard tourism product, not high-density developments. We want to develop Greece as a golf destination. Golf brings people year round.”

She insisted: “The worst of the crisis is over. But irrespective of the crisis and the challenges facing Greek society, Greece is one of the safest and friendliest destinations.”