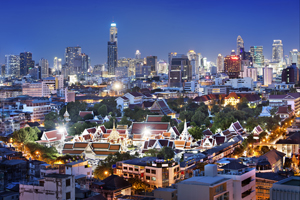 Anti-government protestors in Thailand have called for a three-day national strike from today (Wednesday).

This follows political demonstrations which have taken place in various locations in Bangkok and elsewhere in Thailand since the start of November.

Updating its travel advisory, the Foreign and Commonwealth Office said: “Further protests could take place, with little warning, at various locations, with the main ongoing protest areas situated along Rachadamnoen Avenue including Democracy Monument in Bangkok.

“Some Government opponents have called for a national strike on November 13-15. It is unclear what impact it will have on public and commercial services. You should follow local news.”

An increased security presence and disruption to traffic is expected until the end of the month in the Dusit, Pom Prab and Phra Nakorn districts of the Thai capital after authorities implemented an internal security act on October 9.

“You should avoid large gatherings and demonstrations,” the FCO said.