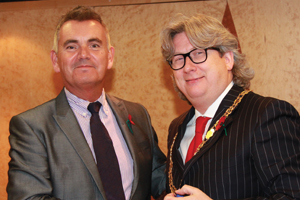 Jimmy Martin succeeded Kevin Thom as president of the Scottish agents’ group two weeks ago. He spoke to Chloe Berman at the annual awards event in Glasgow about the key issues facing the trade

The Scottish Passenger Agents’ Association (SPAA) has gained a reputation for its straight-talking approach in recent years.

Whether it’s Air Passenger Duty, airport expansion or financial protection, the association has not been afraid to speak its mind.

As Jimmy Martin takes over as president from QA Business Travel managing director Kevin Thom, that tradition of outspoken honesty shows no sign of abating.

Martin, who has owned Jimmy Martin Travel in Stockbridge, Edinburgh, for 12 years, is passionate about a number of issues, most of all his members.

Speaking on the morning after the SPAA’s 21st annual awards – which drew its biggest turnout in seven years – he says he is proud of the award winners but concerned about the familiar faces that have left the industry.

“There are lots of people leaving our business,” he says.

“We are losing good, experienced people to redundancy or because they are burned out by the unrealistic demands on them.

“One agent I know has been given double the workload for not a penny more. Lots of staff are demoralised. Firms would get more from their staff if they gave them a pat on the back.”

But what can the SPAA do about it? “We have to shout more about our members and make sure the people at the top know how good their staff are,” he says.

Making sure members communicate with the SPAA is also priority, says Martin, adding:

“I want to engage the members and for people to talk to us and tell us the truth so we can help them in any way possible.”

Martin’s return to the role – he was president from 2007-09 – signifies a shift in the SPAA’s focus back towards the leisure sector following the presidencies of Thom and his predecessor Brian Potter, managing director of Clyde Travel Management, both of whom are business travel agents.

Cruise commissions and discounting is one issue Martin is keen to tackle. “Cruise specialists have been hurt by the commission cuts, but small independents have benefited as they can now compete.

“Complete Cruise Solution is starting to get its act together – they want to work in partnership with us again.”

However, Martin is keen to point out that key issues such as Iata’s drive for a New Distribution Capability (NDC) will continue to be a priority for the group.

Under Thom, the association had been very active in highlighting its serious concerns about NDC, which is touted to bring Amazon-style shopping to air fares.

“The technology could bring some benefits but I still have suspicions about the motivation behind it,” he says. “It’s clear Iata doesn’t value what agents bring to distribution. It could mean more work for no more reward.”

Thom has set up an industry affairs group to carry on the work he has started and build on the SPAA’s relationships with the GTMC, Abta and Advantage.

The association has plenty of challenges ahead. The potential impact of the referendum on Scottish independence next September, Prestwick airport being taken into public ownership and the continuing need to lobby on APD following the government reshuffle, are all on the agenda.

The industry might be changing, but members can expect a consistent approach under the new president.

As Martin says: “For members, it’s just one travel agent handing over to another. I’ll continue to make sure the SPAA’s voice is heard.”