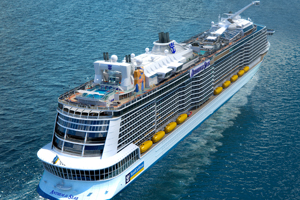 Agents are being given the chance to win places at the 2014 Brit Awards in a Royal Caribbean International peak booking period promotion.

Sixteen places are up for grabs in the incentive, a number of which require agents to nominate their colleagues in one of six categories for Royal’s own ‘B.R.I.T.S’ awards:

Agents need to get a colleague to post a photo of them and 150 words on why they deserve to win their chosen category at the line’s Facebook page for agents at facebook.com/royalcaribbeantravelagents.

Agents can also win by booking and confirming a 2014 cruise that is part of the turn of year campaign between December 12 and February 12 to be entered into a prize draw to win one of 10 places – the other 10 tickets available.

Voting the favourite submissions runs until February 12. Winners will be determined by two equally weighted measurements – the number of votes each agent receives on Facebook and the number of votes they receive from a Royal Caribbean International judging panel.

The winning agents in the Royal B.R.I.T.S Awards receive:

The line’s sales team will be visiting agencies accompanied by lookalikes of previous Brit Award winners such as Justin Timberlake and Will I Am.

Benefits that can be passed onto clients include discounts of up to £500, free parking and a free kids soda package on selected ex-UK sailings.

Head of trade sales Nicki Tempest-Mitchell said: “For all the agents out there who have dreamed of becoming a superstar, or at least sit next to one, this is your chance to make that dream a reality.

“If your colleague, friend or boss has standout selling skills, head to our Facebook page and tell us all about it.”