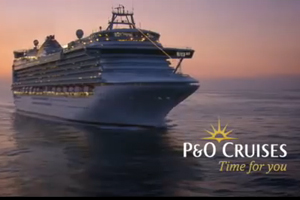 P&O Cruises is claiming a fresh approach to its latest advertising push which breaks on Boxing Day.

The multi-million pound integrated campaign runs across television, print and online until the end of March.

The TV advert will run on ITV and Channel 4 and has been directed by Joanna Bailey, who was behind the recent Lego campaign.

The advert plays against the backdrop of American actress and singer Elaine Stritch’s song “Are you having any fun?”

P&O Cruises marketing director Christopher Edgington said: “We’ve turned up the volume, literally and figuratively, to give a fresh approach to promoting cruise holidays on television.

“Our new TV advertising campaign breaks new ground for P&O Cruises with an infectious soundtrack and storyline designed to appeal to empty nesters, those people who are looking for some indulgent me time now the children have left home.

“Our extensive research shows that this life stage has the greatest potential for us, as Britain’s favourite cruise company, and we are targeting them with an upbeat message about the appeal of cruising which they may not have considered before.

“For years they have been compromised in their holiday behaviour by the differing needs of a growing family. The campaign is design to have emotional appeal and then a rational trigger as the audience identifies with the characters. Now is a new chapter in their lives and it is time for them.”