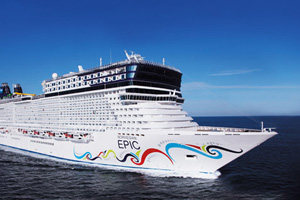 Norwegian Cruise Line’s mega-ship Norwegian Epic is to be deployed year-round in Europe.

He was speaking on board the soon-to-debut Norwegian Getaway, which arrives in Southampton this week en-route to its home port of Miami.

“Consumers in Europe love the ship [Norwegian Epic],” Sheehan told reporters during a preview sailing of Getaway from Rotterdam for European travel agents.

Norwegian Epic already spends its summers in Europe sailing the Mediterranean out of Barcelona. The ship currently spends winters in the Caribbean sailing out of Miami.

The ship will become the largest cruise vessel ever based year-round in Europe.

Sheehan declined to reveal the itineraries Norwegian Epic will operate in Europe or whether it would be replacing one of the two smaller Norwegian ships now based year-round in Europe, Norwegian Spirit and Norwegian Jade.

Itineraries are due to be announced in mid-March.

The 155,873-ton Norwegian Epic is the world’s third largest cruise ship, behind Royal Caribbean International’s Oasis of the Seas and Allure of the Seas.