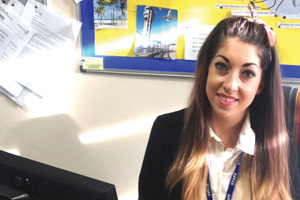 Most newly-trained travel agents spend their first few months on the job under the watchful eye of the shop manager.

But Sophie Jones, 19, had a steep learning curve when she took her first job in the industry. She was the only travel consultant at college-based New Horizons Travel, part of Hays Travel’s Independence Group, when branch manager Katrina Diamantis went on sick leave for a back operation at the start of last year’s summer holidays.

Although she had the support of a senior college lecturer who has run agencies, Sophie had day-to-day responsibility for running the store, from managing and completing all the bookings to dealing with client enquiries, banking and overseeing the paperwork.

“I had always wanted to be a travel agent so I feel lucky to have got a foot in the door, but it was quite daunting,” admits Sophie, who had only worked at the store previously for an hour and a half a week as part of her work experience during her two-year travel and tourism course.

“I was pushed in at the deep end and had complete charge of the shop and was completely by myself. I had never done a booking before by myself, my branch manager had always been there.”

Although the agency was only open two days a week in the summer holidays, it is the only agency to sell National Express coach tickets in Bridlington.

“The general public all knew which days we were open and they all used to come on those days to book their tickets so I used to have queues nearly to the door!” recalls Sophie. “I sold a lot of holidays and learnt on the job, working it out myself or contacting Hays’ head office.”

Her manager returned after four months off work, and Sophie is now also involved in helping to train work experience students in the same way she was.

In December, the agency opened a ‘travel hub’ – an information point – at its sister college in Beverley, East Riding, which is primed to become a travel agency next year once the college has undergone a planned rebuild.

“We take holiday enquiries at the travel hub from the college in Beverley, but currently they are booked at Bridlington. We are hoping we will have an agency at the new site,” says Sophie.

Even better, Sophie’s been told she will be in charge of that agency.

She adds: “I’ve been told that will be my baby!”