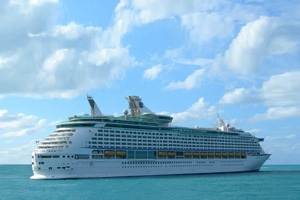 Ten per cent of passengers on a Royal Caribbean International ship in the Caribbean are reported to have fallen ill with symptoms including vomiting and diarrhoea.

US health officials boarded 3,505-passenger Explorer of the Seas in the US Virgin Islands yesterday to investigate the outbreak of gastrointestinal illness affecting at least 300 people. Twenty-two crew members also reported feeling ill.

The US Centre for Disease Control and Prevention said 281 of the 3,050 passengers on board the ship had reported getting sick during a Caribbean cruise that left Cape Liberty, New Jersey, last Tuesday.

The ship underwent “extensive and thorough sanitising” to help prevent more people getting sick during a previous call in Puerto Rico, a company spokeswoman said.

The vessel bypassed a scheduled stop at the company’s beach destination in northern Haiti to sail directly to San Juan, Puerto Rico’s capital.

“This was a difficult decision to make; however, we feel it is best to make this itinerary modification to help prevent any more guests from becoming ill,” the spokeswoman told The Guardian.

She added that special cleaning products and disinfectants that are proven to kill norovirus were being used to clean the ship.

The passengers and crew who fell ill have “responded well to over-the-counter medication being administered on board the ship,” she said.

At least two CDC officials, an epidemiologist and an environmental health officer, were expected to investigate and evaluate the response to the outbreak on the cruise liner.