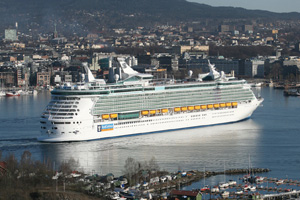 Encouraging booking tends for cruises in Europe and Asia have been reported today by Royal Caribbean Cruises.

Booked load factors are up year on year for the second, third and fourth quarter of 2014 but flat for the first quarter.

Chief financial officer Jason Liberty said: “While the Caribbean continues to feel pricing pressure, strong demand for our other itineraries has more than compensated.

“In particular, load factors and pricing are up significantly for sailings in Europe and Asia.

“The overall result is increasing yields despite the remaining overhang from last year’s industry events.”

He was speaking as the parent company of Royal Caribbean International, Celebrity Cruises and Azamara Club Cruises reported adjusted net profit up last year to $530.6 million from $432.2 million in 2012.

This was attributed to strong late demand for Europe and Asia sailings coupled with a continued strong performance in onboard revenue.

The company recorded restructuring and related charges of $56.9 million for the full year, including $43.0 million in the fourth quarter. The charges related to previously announced global restructuring and the pending sale of non-core businesses at Pullmantur to enable the Spanish arm to concentrate on its cruise business and Latin America.

Chairman and chief executive Richard Fain said: “Six months ago we said we thought we had reached an inflection point and these figures clearly bear that out.

“It has been a challenging year, but the fact that we have achieved our guidance from a year ago nicely demonstrates the strength of our business.

“Despite the lingering impact of 2013’s negative media coverage on 2014, the year – and what it portends for future returns – is looking highly promising.”