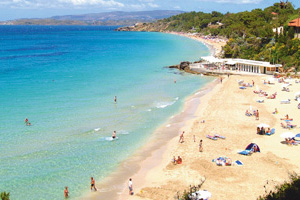 Aftershocks and tremors continued to be felt yesterday after the Greek island of Kefalonia was shaken by an earthquake.

There were reports of minor injuries and some damage to property, according to an updated Foreign and Commonwealth travel advisory.

A state of emergency has been declared on the island yesterday to allow the Greek government to implement earthquake response plans.

“The airport remains operational but there may be some disruption to port services,” the FCO said.

The 5.8 magnitude quake on Sunday resulted in aftershocks and tremors continuing into the next day.

Local news website, kefaloniapress.gr, reported some damage on roads and buildings in the towns of Lixouri and Argostoli.

There were some slight injuries from falls, and falling objects inside apartments.

The epicentre of the quake was reported to be about 175 miles west of Athens, near Lixouri on the island, and Its depth was 11 miles, the Athens Geodynamic Institute said.

Manolis Skordilis, an associate professor of geophysics at the University of Thessaloniki, told The Associated Press: “This area shows the highest incidence of seismic phenomena, not only in Greece, but on an east-west axis stretching from Gibraltar to China. In 1983, there was a 7 magnitude quake in the same area … We have already had many aftershocks and expect many more.”