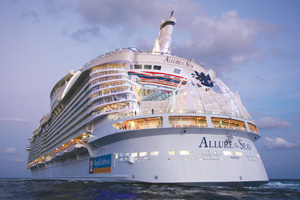 The world’s biggest cruise ship, Allure of the Seas, will be based in Europe for the first time next year as Royal Caribbean International targets new customers.

The cruise line said support from the UK trade had been a key factor in the decision.

UK managing director Stuart Leven said agents would have an opportunity to sell “a unique and innovative ship”, perfect for the family market, when the 6,318-berth Allure, which launched in 2010, starts sailings from Barcelona on May 3, 2015.

He said: “We look at the support from the trade when making these decisions, just as we did when we decided to base Anthem of the Seas in Southampton. We look at the markets that support the brand. The UK has always been supportive of Independence of the Seas out of Southampton and it was an obvious decision to take Allure to the Med and open it to a new customer base.”

Royal Caribbean has produced a mini-brochure about the ship and a marketing toolkit that includes videos, campaign tools and images.

Leven said operating Allure in Europe alongside Anthem of the Seas, which will be based in Southampton when it launches in 2015, demonstrated the line’s commitment to the European market. It will be the first time Allure has sailed outside the Caribbean.

The ship will operate seven-night cruises from Barcelona between May and October 2015, calling at Palma, Marseille, La Spezia and Civitavecchia, where there is the chance to join the ship.

Royal Caribbean is giving 20 agents the chance to win a VIP trip to Barcelona to see Allure: 10 places will go to agents who find a ‘golden ticket’ in trade packs, due to be delivered from February 12, while another 10 can be won in a draw by agents who make a booking and register it at Cruisingpower.co.uk.