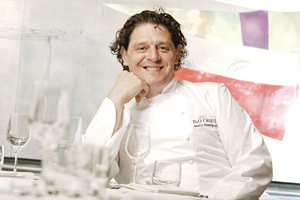 Marco Pierre White, Atul Kochhar and Olly Smith have partnered with the cruise line in the past and will again have a presence on Britannia.

TV chef James Martin is also set to develop the first cookery school on a British ship. The Cookery Club (pictured below) will host classes for up to 24 people.

The fifth ‘food hero’ is pastry chef Eric Lanlard, who has created a range of sweet treats for the Market Cafe in the ship’s atrium.

Kochhar’s speciality restaurant Sindhu (pictured below) will feature on Britannia, as will Olly Smith’s The Glass House. Pierre White will create dishes for the main dining room (pictured last).

The heroes were unveiled at a special event at Fish Island in London where certain areas of the ship were replicated for agents, past passengers and members of the press.

Christopher Edgington, marketing director at P&O Cruises, said: “These are exciting innovations and the great thing is that some of these ideas have been created internally by our staff in Southampton.

“We will offer the best of the best on Britannia. People will know it is a P&O Cruises ship when they get on board.

“The ship is inspired by our past and designed for the future.”

He said he was excited by what the ‘food heroes’ would bring to the ship, and added that food was a very important part of P&O’s history.

Another new addition to the ship will be an extra entertainment option. Performers will randomly appear in different areas of the ship. Edgington said there would be nine entertainment venues, not including the spontaneous pop-up entertainers.

The Limelight Club will act as a dining option and an entertainment venue. The ship will also have a dedicated children’s club for two to 17-year-olds, with an area for teens.

Edgington said he would ideally like to see the new features rolled out fleet-wide.

The 1,837 cabin ship will also feature an Oasis Spa and open deck Retreat, four swimming pools, an art collection worth more than £1 million, a dedicated wedding venue, and an area for guest speakers, talks and demonstrations called The Studio.