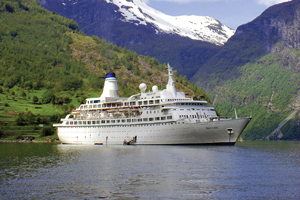 All Leisure Group is blaming a series of “adverse factors” for pushing it into the red last year.

Pre-tax losses of up to £14 million for the year to October have been revealed in a trading statement, against a profit of £800,000 a year earlier.

The company’s loss-making ship MV Discovery is to be disposed of at the end of the summer.

All Leisure said it expects the underlying trading profit for 2013 to be “broadly similar” to the £900,000 reported the previous year.

The group took on additional costs of £600,000 through the closure of an office in Southampton and the related write-off of software and other items in addition to the previously reported £1.5 million cost of closing the group’s headquarters in Burgess Hill and moving to Market Harborough.

All Leisure also had to take an impairment charge of £6.7 million following annual valuation of the ship MV Discovery (pictured).

“The market value of mature cruise ships has reduced significantly in the last 12 months and it has been decided that the loss-making MV Discovery will be disposed of at the end of this summer,” the company said.

Underlying profits should benefit from the elimination of MV Discovery’s trading losses which are currently in the region of £4 million a year, All Leisure said.

The impact of the non-operational factors is expected to result in a group charge of almost £10 million.

All Leisure has also suffered from the breakdown of MV Voyager, political unrest in Egypt which forced the cancellation of all of tour operating brand Discover Egypt’s Nile cruises for four months until November and prompted passenger refunds, plus the cancellation of three Travelsphere escorted tours to the US due to the closure of national parks, hotels and monuments.

The impact of these operational factors is expected to impact underlying results adversely by about £500,000.

Discover Egypt’s overheads have since been cut and the business is once again trading profitably.

“Since the year end, trading has been robust and the board is satisfied that the group is trading profitably,” the company said.

Swan Hellenic is trading well, although passenger revenues are slightly lower per person year on year. Booking revenues are 11.1% ahead of the same time last year.

Hebridean Island Cruises continues to go “from strength to strength” with the value of forward bookings up by 27% based on capacity reduced by 4.2% due to a shorter sailing season in 2014.

The sales of river cruise charters under the Swan Hellenic and Hebridean Island Cruises brands are described as “satisfactory”.

Travelsphere has withdrawn its 2014 river cruise programme on the Rhine and Danube, blaming over-capacity in the market place.

Overall Travelsphere sales are 1.8% ahead year on year after excluding the river cruising commitment with passenger revenues slightly ahead.

Singles operator Just You is also trading in line with expectations with Vietnam selling well. Sales are on a par with this time last year and passenger revenues are slightly ahead.

Advance and current sales for Discover Egypt are very limited but there has been a slow improvement, the group said.

“We have substantially reduced the overhead year on year, and as a result of this we expect Discover Egypt to make a small contribution in the current year. Discover Egypt currently has no commitment on aircraft seats, hotel rooms or cabin berths.”

All Leisure is due to release its full audited results on February 24.