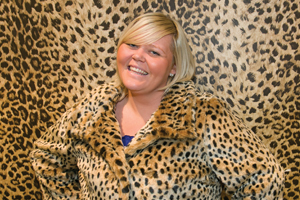 There is one thing in particular Travel Weekly cover star Kelly Norris wanted to see on her trip to California.

She was desperate to see the Hollywood Sign, a cultural icon and one of the landmarks most commonly associated with Los Angeles.

So it was with some relief during the trip that she got the chance to see the 45 foot tall sign, overlooking the Hollywood district of LA.

“One of the main things I wanted to see on the trip was the sign and when we had lunch at the Shangri La hotel in Santa Monica you could see it from the rooftop terrace,” recalls a delighted Kelly.

Her mission accomplished, Kelly went on to enjoy everything California had to offer.

“It was the trip of a lifetime. I had never been to California and it was on my list of places to go to,” admits Kelly, who enjoyed a lot of travel as a child as her mum worked as a travel agent for Lunn Poly, then Thomson – where Kelly also started her career – and then went on to work for British Airways.

Kelly won a place as a Travel Weekly Coverstar after losing three stone in weight in just 12 weeks, an achievement which added to her excitement of taking part in the trip.”Losing weight really boosted my confidence and then winning this and having a makeover was great,” she says.

From the moment Kelly stepped on board and was upgraded to upper class on the ?Virgin Atlantic flight to her moment of fame during her photoshoot on Huntingdon Beach, she relished every minute.

“When I found out I had an upper class ticket, it was just out of this world. It made the flight of 11 hours seem like just four or five hours; having so much space and comfort made a huge difference,” she says.

Huntingdon Beach was one of Kelly’s favourite places on the trip, not just because she had her covershoot there.

“The views from where we stayed at the Hilton were amazing. It’s so laid-back and really popular, with lots of campervans, surfers, people playing volleyball, paddle-boarding and surfing. We had a bonfire on the beach – I didn’t even know you could do that there!”

Kelly even climbed on to the lifeguard’s stand to have her photo taken – in a fur coat. “It was like being famous!”