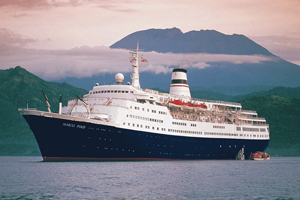 A cruise passenger was killed and 15 were injured when a wave hit Cruise & Maritime Voyages Marco Polo during a storm.

Marco Polo was heading to its homeport in Tilbury from the Azores following a 42-night voyage when it was hit by a wave in the southwestern approaches of the English Channel.

In a statement the cruise line said: “We would firstly like to advise our customers that following the incident on board Marco Polo, the next of kin of the two affected passengers have been informed.

“Our thoughts and prayers are very much with these passengers and their families during this difficult time.”

Reports say 85-year-old James Swinstead from Colchester was killed, having been sat by a window when the water poured in.

A 70-year-old female passenger was airlifted off the ship and another 14 were treated for minor injuries.

The line said its scheduled sailing Land of the Northern Lights was still set to depart on Sunday.

Cruise & Maritime has refused to comment on claims from the dead man’s widow that the ship looked badly maintained.

Mrs Swinstead, who was airlifted to hospital in France, told the BBC that her insurance won’t cover the cost of getting home.