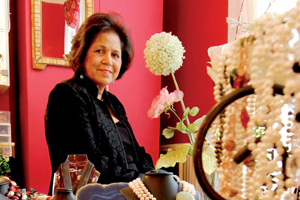 Tributes have been paid to travel industry stalwart Bella Rangel-Callan, who died on Thursday, February 20.

Rangel-Callan, who was 78, passed away in Chelsea and Westminster Hospital, where she had been for several weeks. She is survived by her husband Tim, three children, Chris, Bernard and Cristina, and four grandchildren.

Born in Poona (now Pune), India, she worked in the travel industry for almost 50 years. Her career included stints as a sales representative for British Airways in Hong Kong, owning a bed and breakfast in Bayswater, London, and starting a luxury tour operation, Pearls of the Orient.

In 1979, she opened a business travel agency on behalf of Norwegian shipping consultancy Jebsens Travel, specialising in looking after ship crews’ travel. Rangel-Callan led a management buyout of the parent company in 1998.

In her later years, she created luxury jewellery brand Bellissima B. She made most of the jewellery herself and often displayed her wares at travel industry events.

She was well known for her involvement with the Association of Women Travel Executives, of which she was deputy chairman for many years and later chaired its Benevolent Committee.

She also served for many years on the Abta Greater London region committee and became its vice-chairman. She was elected a fellow of the Institute of Travel & Tourism, where she created a bursary to provide an annual grant for a top-performing travel student.

Tributes to Rangel-Callan have poured in from across the industry.

Jackie Steadman, director of TravelTime World in Berkhamsted, said:  “Bella was a truly inspirational lady. Affectionately known as the grande dame of the travel industry, there was seemingly nothing she couldn’t do. She loved life, people and laughter and she will be sadly missed by all of us.”

Fiona Jeffery, founder of Just a Drop, said: “Bella was such a travel personality with a huge heart.”

Claire Steiner, an ITT board director, said: “She was such an inspiration to us all and I was privileged to have known her. RIP, Bella. You will be greatly missed by so very many people, whose lives you touched and blessed.”