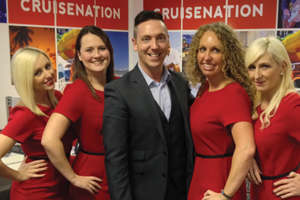 As an eight-year-old boy, Phil Evans told his mum he was going to own a travel company after he spotted a young Richard Branson in a newspaper.

Now, with more than 20 years’ industry experience, he’s as focused as ever on making his company Cruise Nation a growing success.

He launched the Swansea-based retailer, which is a member of Hays Independence Group, in 2009. Since then he has been growing the business and this year he expects online sales to increase as he has introduced online booking technology.

Until now, online bookings have been available only for cruise-only product. But as Cruise Nation specialises in what it calls Smart Packages – combined cruise and land-based holidays, which make up 90% of sales – Evans has been keen to change that.

He says Cruise Nation’s Smart Packages help to attract the new-to-cruise market, and that 80% of its customers last year were cruise first-timers.

The retailer has been working with Traveltek to make its Smart Packages bookable online. The new booking process allows customers to book flights, accommodation and cruises in one package.

“By selling our packages online, we will be able to grow our sales by between 30% and 50%. We’re perfectly happy with our customers booking online because we have identified that for the price we sell at – which is lower than most tour and cruise packages – our customers are happy to part with that money online.”

Cruise Nation sells through a number of other agents, and Evans, who also owns Unbeatable Florida, is looking at creating a website for trade bookings.

The retailer’s most popular packages include sailings with Costa Cruises, Carnival Cruise Lines, MSC and Norwegian, all of which are Cruise Nation’s preferred suppliers.

“Our biggest cruise line in 2013 was Costa, followed by MSC and Norwegian,” he says.

“We have been doing a lot more with Princess Cruises and we are in discussions with P&O Cruises.”