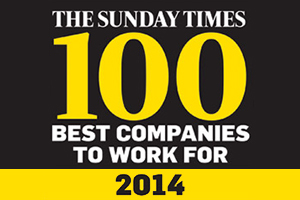 Half a dozen travel companies have been rated as among the 100 best mid-sized companies to work for in the UK.

A similar number appear in the top 25 best big companies to work for in annual lists compiled by the Sunday Times.

Travel search company Skyscanner comes in as the top travel firm to work for the in mid-size range, placed 6th in the top 100.

The list of Britain’s 100 best small companies to work for is due to be published by the newspaper next weekend.

Meanwhile, Frank Meysman of Thomas Cook is among those shortlisted in awards to find the country’s top non-executive directors.

The non-executive chairman of the travel group is shortlisted among quoted companies outside the FTSE 100 in awards which are to be announced on April 3.