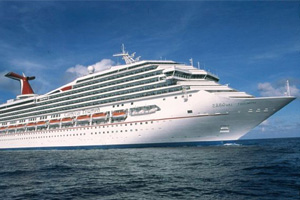 A group of passengers is suing Carnival Corporation for damages of $5,000 a year for the rest of their lives for ongoing medical and mental problems after suffering on Carnival Triumph which drifted at sea for days after losing power.

A fire broke out in the ship’s engine room during a four-day cruise in February 2013, leaving it without power and most of its electricity, forcing passengers to endure human waste running down hallways, limited water supplies and extreme heat.

The ship was finally towed into port after about five days in the Gulf of Mexico and Carnival sought to make amends by offering each passenger $500, a voucher for a future cruise, refunds of most onboard expenses and reimbursement for transportation, parking and other expenses.

Many of the 33 passengers involved in the trial complain of lingering emotional issues, anxiety and depression, while some claim physical ailments they blame on squalid conditions.

Several of the passengers are seeking $5,000 in damages a year from Carnival for the rest of their lives, claiming they will need continuous medical monitoring because of what happened on the ship. They want the money in lump sums based on government tables estimating their life expectancies.

One of the plaintiffs, Debra Oubre, 59, told Reuters she has experienced panic and anxiety attacks since the cruise, and also blames the voyage for a urinary tract infection.

“It was chaotic. People were in dire need of help,” she said. “We were standing in line for food for five hours.”

Carnival Corporation said in a statement to Reuters that while it recognises its guests experienced uncomfortable conditions, all passengers returned safely and were provided with a full refund.

“This is an opportunistic lawsuit brought by plaintiff’s counsel and plaintiffs who seek to make a money grab,” a company spokeswoman said.

Carnival attorney Curtis Mase has asked senior US district judge Donald Graham to reject all of the damage claims. In court papers, Mase said the passengers have not proved their health issues are linked to the Triumph cruise and failed to show they suffer from any lingering problems.

The passengers, Mase wrote, “are not entitled to damages simply for experiencing the conditions on the vessel.” And, he added, “they failed to prove that Carnival’s conduct was the legal cause of the injury.”

Judge Graham, who is hearing the case without a jury, has ruled that passengers cannot collect punitive damages and may only get damages for past and future medical costs that are conclusively linked to what happened on the Triumph.

Reuters reported that Graham already dealt a major blow to the cruise line by ruling that the engine catching on fire is proof alone of negligence on Carnival’s part.

After the cruise, Carnival Cruise Lines announced a $300 million scheme to add emergency generators, upgrade fire safety and improve engine rooms on all 24 of its ships.