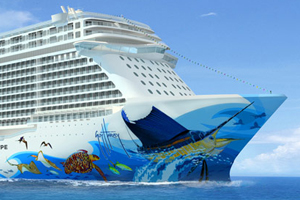 Norwegian Cruise Line is to base its newest ship Norwegian Escape in Miami year-round.

The line is also offering a 10-night transatlantic cruise from Southampton to Miami on October 29, 2015 as the ship is repositioned.

Kevin Sheehan, Norwegian’s chief executive, said: “Norwegian Escape’s arrival to Miami coincides with Norwegian Epic’s year-round Europe deployment, demonstrating the balanced approach we used to develop our winter 2015/16 deployment and ensuring that we had a varied offering of premium destinations that would be exciting to our guests.

“Much of this deployment was designed based on feedback from our guests and travel partners, and we know they will be happy with the changes and enhancements we have made.”

The ship will be the line’s largest when it launches, with 4,200 berths.

Norwegian Gem and Norwegian Breakaway will sail from New York to the Caribbean.

Norwegian Jade repositions from Europe to Houston, Texas, and will sail on seven-night Western Caribbean cruises.

Norwegian Spirit is also to sail from the Caribbean on alternating seven-night Eastern and Western Caribbean itineraries from Port Canaveral.

Norwegian Sun will return to South America for the first time since 2010, sailing between Santiago, Chile and Buenos Aires, Argentina.

For the first time ever, Norwegian will base a Jewel-class ship in Los Angeles for the winter season. Norwegian Jewel will sail 22 seven-night Mexican Riviera itineraries from October 4, 2015, until April 24, 2016.