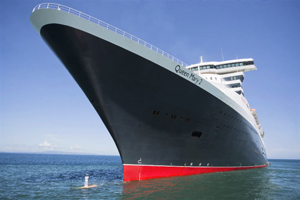 Cunard has released a video revealing how an incredible image of Queen Mary 2 and her captain was created.

The image, captured by photographer James Morgan, showed captain Kevin Oprey on the bulbous bow of the iconic liner.

The pictures were shot a mile off the coast of Bali during the ship’s Round World Voyage celebrating its 10th anniversary.

The video gives the captain’s insight into how the photographs were captured and how it felt to be left stood alone under the hull of Cunard’s flagship vessel.