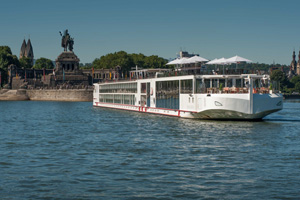 Viking Cruises is breaking its own world record by launching 14 river cruise vessels in three countries in 24 hours.

TV baker Mary Berry christened the boat Alsvin in Amsterdam while ceremonies were held in Avignon and Rostock.

Each of the Viking Cruises Longships christened will sail on the Danube, Rhine and Rhone rivers.

The company set a new Guinness world record for the most ships inaugurated in one day by one company. The record attempt was confirmed by an official adjudicator in Amsterdam and Avignon.

“As someone with a reputation for embracing new challenges and reinventing herself all through life, Mary embodies the Viking spirit of exploration – and also the spirit of the curious, experienced travellers who sail with us all over the world.

“For us, though, the real achievement of these launches comes from being able to offer our guests a fleet of new, state-of-the-art Viking Cruises Longships on which to enjoy some of Europe’s most iconic river routes.”