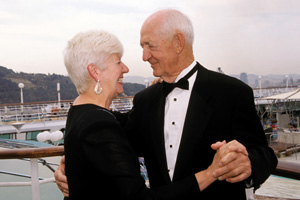 Cruise lines are confident last week’s pension reforms announced in the Budget will prompt a boom for cruises.

The proposed changes will free up pensioners’ cash earlier in their retirement. While one minister’s suggestion that newly retired people might blow it on fast cars made headlines, commentators predicted they were likely to book that dream trip.

Cruise lines were careful not to suggest they would actively encourage pensioners to spend their money unwisely, but they are expecting to benefit.

Nathan Philpot, sales and marketing director at Fred Olsen Cruise Lines, said: “Traditionally, retirees have downsized their homes to provide additional funds. These proposed changes will empower those qualified to rethink how they spend their savings.”

Mike Bonner, UK general manager at Silversea Cruises, said: “For our target demographic it’s got to be an opportunity.”

Azamara Club Cruises commercial director David Duff added: “It can only be a good thing for a business like ourselves if people get more access to their pension. I would like to think it’s an opportunity, but we have to be responsible about it.”

Hopes that pension changes would spur demand came as Clia UK & Ireland announced its latest figures, which showed the UK market grew by 25,000 passengers, or 1.5%, in 2013.

It also revealed the proportion of late bookings – those within three months of departure – was the highest for a decade at 40%.

However, Clia said there were signs of momentum returning to the industry with the deployment of P&O Cruises’ Britannia, Royal Caribbean’s Anthem of the Seas and Princess Cruises’ Royal Princess from Southampton in 2015.

Clia director Andy Harmer said: “The industry’s continued confidence in the UK market is demonstrated by the increasing number of ships that will sail from British ports.”