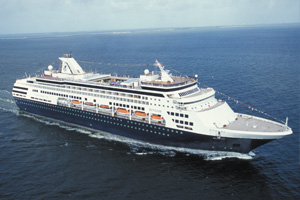 An extended range of ex-UK departures from Harwich in summer 2015 have been put on sale by Holland America Line (HAL).

Mid-size ship Ryndam (pictured) will be based in the UK longer than before with sailings between May and September.

A total of 13 departures feature in a preview brochure, ranging from seven to 14 nights in duration, plus a 21-night re-positioning voyage to Venice at the end of the season.

Two 14-night Northern Lights itineraries have been added with the ship circumnavigating Iceland and including Norway, the Shetlands and Faroe islands .

A 12-night Western Europe Explorer has also been introduced with calls in France, Spain, Portugal and Gibraltar, including an overnight in Lisbon.

Prices lead in at £699 per person for a seven-night fjords cruise, while the line is offering up to $100 per person onboard spending money for ocean view accommodation bookings and above made by July 30.

Passengers booking a Neptune or Pinnacle Suite will also be offered a free Pinnacle Grill dinner and premium wine package .

The programme runs between May 4 and September 12 following the ship sailing from Tampa in Florida on April 19.

The Harwich deployment makes the cruises accessible both from London and Stansted, where cruises can be linked to flights from Scotland and the north of England.

HAL will have six ships offering European departures in 2015.