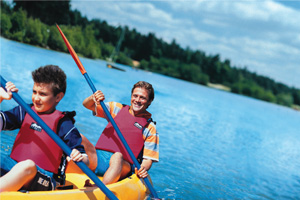 A Center Parcs TV advert has been banned as “irresponsible” for encouraging parents to take their children out of school during term-time.

The Advertising Standards Authority upheld two complaints and decided to ban the advert.

“We told Center Parcs to avoid promoting family breaks which were available only during school term-times,” the advertising watchdog ruled.

Center Parcs confirmed to the ASA that the advert had conveyed a particular holiday price that was available outside school holidays.

The company said it was the responsibility of parents to exercise judgement regarding their children “and there was nothing in the ad that encouraged parents to take their children out of school during term-times”.

A Centre Parcs spokesman described the ruling as “extremely harsh,” the BBC reported.

But the ASA said: “We considered the emphasis of the ad was on a family break and that the overall impression was that families could take advantage of the advertised offer, which was not available at weekends or during school holidays.

“Because the ad had focused on a family break to promote an offer which was available only during term-time, we concluded it irresponsibly encouraged parents to take their children out of school.”

The government introduced tougher regulations in September to crack down on term-time absence for holidays.

Parents in England and Wales have a legal responsibility to ensure their child attends school, unless they have opted to home educate them.

A study by the BBC One Breakfast programme last month suggested the number of fines issued to parents by local authorities had increased by more than 70%.