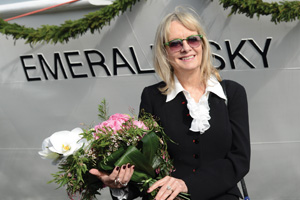 Scenic Tours and its new river cruise line Emerald Waterways can now be sold through the trade.

The company revealed it was expanding from direct-sell to also work with the trade at the christening of the 182-passenger Emerald Sky in Amsterdam by 1960s style icon Twiggy.

Scenic has started working with selected agencies, including Go River Cruise and Cruise118, and is actively expanding the network.

The company said it offers “highly competitive” rates of commission and agents will be able to offer any direct-sell special deals on a commissionable basis.

Angela Sloan, national sales manager for the UK, said: “With eight Scenic ships, and two more this year, and the two new Emerald ships with two more in 2015, we have the growing infrastructure to work with the trade. We have developed initial relationships with key volume drivers for the river cruise market, but will work with all agents.

“From consumer roadshows we know that there are customers who want to book through an agent they know.”

Emerald is targeting 50% of its bookings through the trade and will run fam trips in the future.